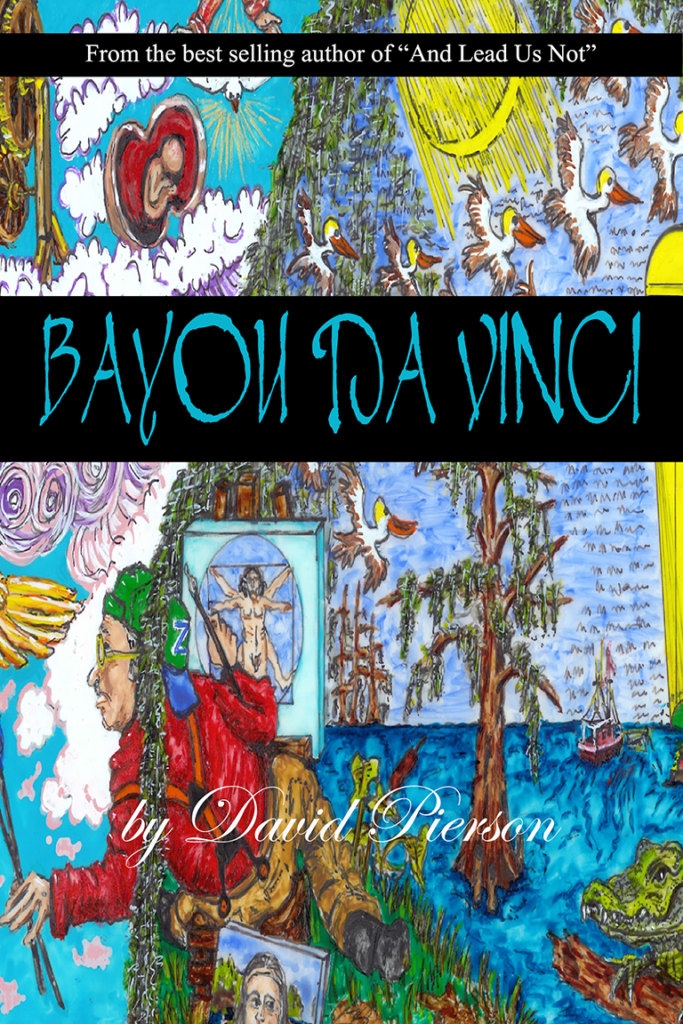 But there is a problem with the man because he is actually three people in one!

In addition to his “Bayou Da Vinci” persona, there’s also his madcap alter ego, “Mr. Z,” who often takes over in the middle of Wally’s classes. Mr. Z doesn’t talk to animals, inanimate objects and invisible people; he argues with them. However, he makes too much sense to be called crazy but is far too crazy to be considered sane.

And then there’s “I.” A dark soul, “I” is the identical twin brother of Wally (who doesn’t have a twin brother). “I” is the mirror image of Wally — except for the scar on his lower lip. This scar, which, instead of being on the left side — like Wally’s — is on the right side. Something else about the scar: It is more pronounced on “I,” as if it hasn’t healed as well as Wally’s scar.

Listen to an Excerpt

“Could not put this down. Bayou Da Vinci entertains you while offering you a perspective that you probably would not have considered before. Definitely a fun read!”

DAVID PIERSON
2020-05-17T09:54:56-07:00
“Could not put this down. Bayou Da Vinci entertains you while offering you a perspective that you probably would not have considered before. Definitely a fun read!” -Mimi
https://davidpierson.net/testimonials/mpark/

“There are so many moments of Bayou Da Vinci that leave you saying, "Wow!" You'll never look at "Green Eggs and Ham" the same way again.”

‘Don’t say drugs are bad until you’ve tried them’

A knock on the door and in, like room service, came Dr. Seuss. Thirty copies of Green Eggs and Ham rolled in on a book cart by an intern for the school librarian.

Mr. Zeringue assigned reading parts for Sam-I-Am and the grouch, and the class of ninth graders giggled like they were three again and it was being read to them by their mothers.

When it was over and the grouch realized he liked green eggs and ham, Mr. Zeringue perched himself on top his desk.

There, on the desk, was a blue baseball cap with the initial Z.

“And what,” he asked, putting on the cap, “is the moral of this story?”

Then someone came up with the idea to raise both hands, and several others did the same.

Finally, Mr. Z called on a student, who proudly told him the moral: “Don’t say you don’t like something until you’ve tried it.”

Another student, feeling the need to expand on what the girl had said, added his own explanation. “The grouch said he didn’t like green eggs and ham until he tried them. Then he saw he liked them.”

Every head nodded, and the girl Mr. Z had called on initially, spoke apparently for the entire class. “Yes, that’s it. Don’t say you don’t like something until you try it.”

Author David Pierson offers listeners a humorous glimpse into the many minds of his imaginary friends. He and they touch on everything from Shakespeare to Dr. Seuss, from education, politics, and culture to religion. Listen here to a funny, insightful original thinker. New episodes are available to stream or download via these and other podcast apps every Tuesday and Thursday.

PETIT BIRDIE: Has anyone told you Bayou Da Vinci would make a good movie?

PIERSON: (laughs) All the time. I’ve heard that about almost everything I’ve written. I suppose that’s because, when I write, I try to create a picture in my reader’s mind. . .
To answer your question, though, I don’t think Bayou Da Vinci would translate well to the big screen. . .
One of the first reactions I did receive, though, when I first introduced Wally Zeringue, English teacher, in my “Bayou Da Vinci” blog, was from someone in Hollywood who said it might translate well to the small screen, TV, because of the open-ended nature of my narrative.

PETIT BIRDIE: What do you or this Hollywood reader mean by an “open-ended” narrative?

PIERSON: Simply that the story about Wally Zeringue in Bayou Da Vinci is something of a running story. It doesn’t really have an ending. The whole narrative is about a brilliant but crazy teacher and the effect he has on his students because of all the things he says and does in the classroom. . .

It’s sort of a reverse Walter Mitty story where it’s what Wally’s students see and imagine about him after all his shenanigans in the classroom. . .

PETIT BIRDIE: That must be exciting.

PIERSON: Not really. I’ve heard things like that before on two other stories I wrote, Death Cues and Five O’Clock Raven. In fact, Five O’Clock Raven went into pre-production with the working title Eliminating Deadwood, and a few fairly recognizable names signed on with it, but it didn’t pan out. . .

It can be an adrenalin-rush when some big names in the motion picture business ask to read your script or say they like something you wrote. In the end, though, you learn that the people in the motion picture business may have one foot in your world of imagination (where you’ve planted both of your feet); but their other foot is firmly planted in the real world of financing and all the things that go into turning a work of imagination into something on the screen. . .

It’s a hard lesson for a writer, but you have to put it out of your mind and just keep writing. You can’t let yourself get caught up with what anyone says — regardless of who that “anyone” is — unless they’re handing you a check when they say it.